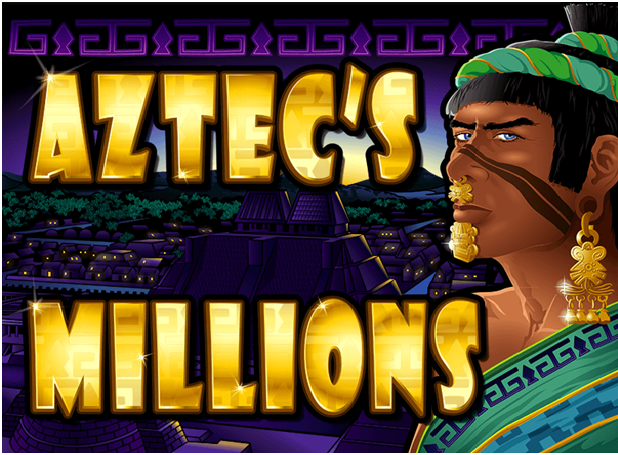 The Aztec’s Millions pokies is based around the ancient Aztecs, featuring Aztec King and a golden idol which acts as the game’s scatter symbol. This pokies has many features, however the main reason many will play this game is the progressive Jackpot offered, which can net a player in excess of a million dollars. The Aztec’s Millions jackpot is currently worth $1,870,368 (at the time of writing). It was last hit on September 2009, awarding$1,261,887 at that time.

RTG had brought Aztec’s Treasure, one of their most famous titles, before launching Aztec’s Millions back in 2009, increasing the number of paylines to 25 and adding a high-value progressive jackpot to the original version. Other game features have remained exactly the same, although it may be important to note that players can no longer select their preferred bet size but are rather required to wager $5 per spin.

What is Aztec Millions Progressive Jackpot game about? 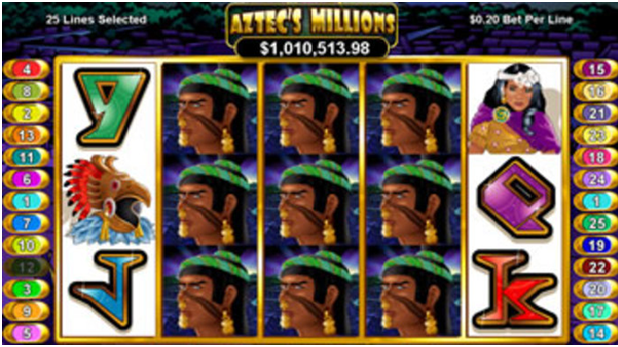 Aztec’s Millions is a colorful progressive pokies machine powered by Real Time Gaming software. The jackpot is always at least $1 million, and it is won when 5 “Aztec’s Millions” symbols appear on a payline.  This pokies, like many other online pokies features five reels with 3 symbols displayed on each reel. The game has 25 win lines, although unlike many other pokies, this is not customisable, so you’ll always play all 25. The stake when playing is also fixed to $0.20 per pay line, meaning that each spin will cost a set $5. 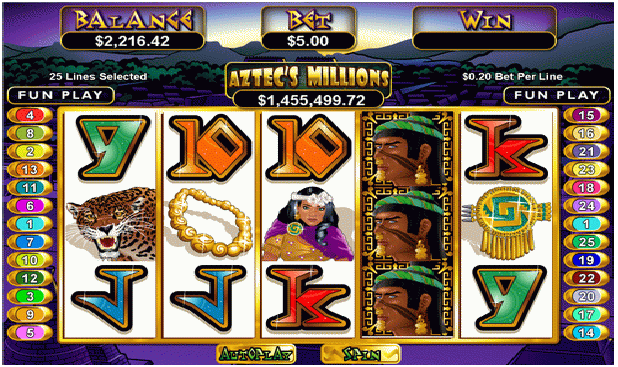 You can play Aztec Millions at any online RTG powered casino either at PC or mobile. Aztec Millions has an ancient theme and is based on an interesting story that involves the Aztec King. When you play Aztec Millions for real money you will have a choice of how much you want to bet and how many payline you want to play with. You can bet anywhere from one penny on one payline or up to twenty cents on all twenty-five paylines.

All wins are paid out when landing consecutive symbols from left to right, the majority of symbols paying out when landing 3 in a row, although you’ll gain prizes for landing 2 in a row for the best symbols, including the mysterious looking lady, the tiger and the bird like creature.  Other symbols in the game are the playing card characters from 10 to Ace.

You do not have to get all five Aztec symbols lined up to win money. There are several other winning combinations through the scatter and wild symbols. The wild symbol is the Aztec King, and when you line up three or link Aztec Kings on the second third, and fourth reel you will win some extra cash.

The Aztec King (Wild Symbol) can replace every symbol in the game with the exception of The Idol symbol, which is the scatter symbol. When you line up three or link of the scatter symbol (Idol symbol) on the second, third, and fourth reels you will get free spins.

What are the features in Aztec Millions Progressive Jackpot? 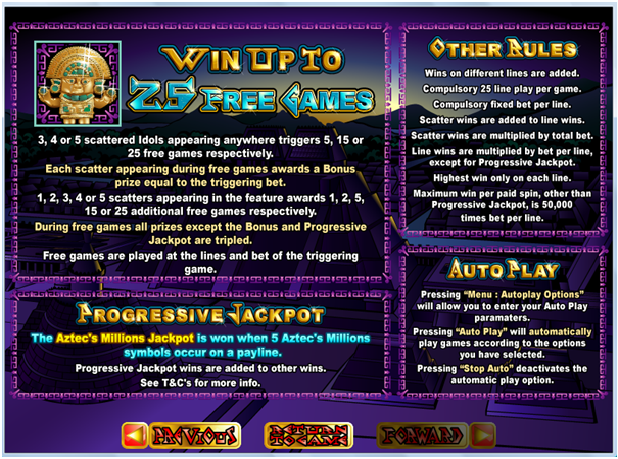 Aztec Millions Progressive Pokies have Free Spins and Bonuses as features. When you line up three or more Idol symbols (scattered) you will trigger free spin. You can win up to twenty-five free spins however keep in mind that putting together five of the Aztec Millions symbols one all of the payline will enable you to win the online progressive pokies jackpot.

You can get a regular win and a scatter win at the same time. You are able to win more than once on one payline, however most Internet pokies machines only allow the player to win on one payline, but Aztec Millions pays out twice.

Aztec King only appears on reels 2, 3 and 4, and it acts as a Wild symbol, substituting for all other game icons with the exception of Aztec’s Millions and Idols. Three or more Idol Scatters appearing in any position can multiply your total bet up to 100 times, while this particular selection of symbols also trigger the Free Games round. 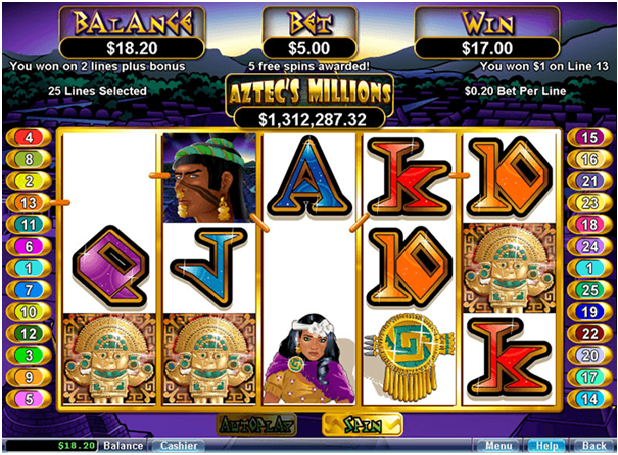 This pokies game has one coin available as a stake by the minimum wager of $5. Aztec woman is the game’s highest paying symbol, awarding 5,000 coins or $1,000 when five of these appear on any active payline. Meanwhile, there are two combinations of game icons paying out 2,500 coins, with four Aztec’s Millions or five leopards appearing on an active payline awarding the said amount.

To win the progressive jackpot you simply need to land the ‘Aztec’s Millions’ symbol all 5 times on a win line. Land 3 in a row and you’ve already won 250x your bet size but the excitement is rising. Land the fourth and your win has now increased to 2500x your bet size. At this point, you are just one symbol away from changing your life forever. This might well be one of the most excruciating waits of your gambling career, but if the ‘Aztec’s Millions’ symbol does appear then you win huge jackpot. 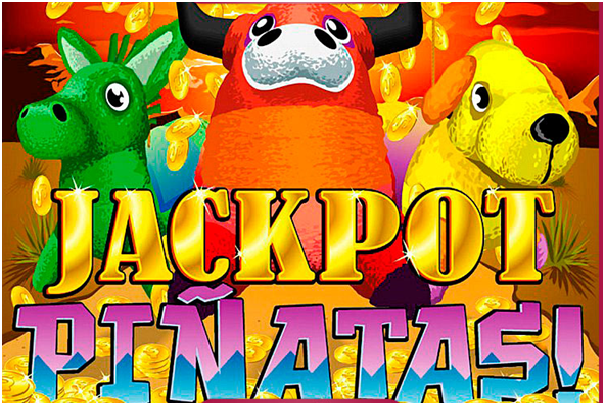 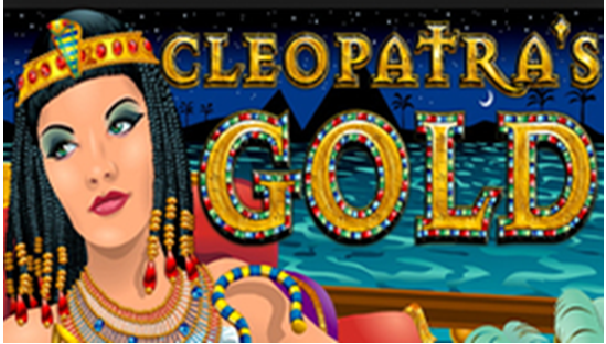 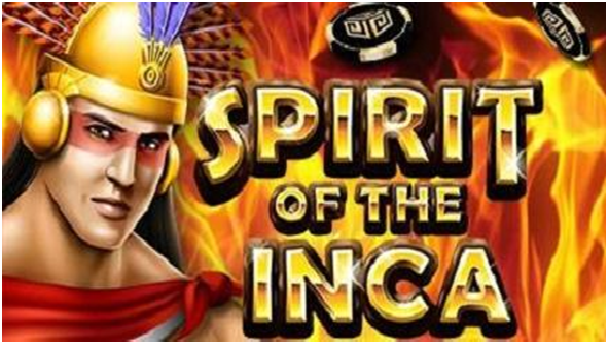 Spirit of the Inca Progressive Jackpot