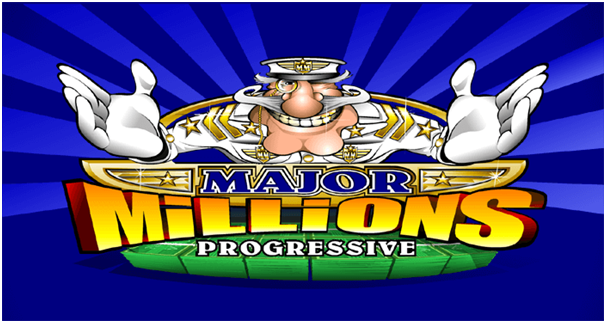 When you talk of progressive jackpots the two prominent games from gaming giant Microgaming that hits the mind is Mega Moolah and Major Millions. Major Millions  with its military theme currently has the jackpot worth $254,854 (at the time of writing). On average, this jackpot pays out $505,400 every 29 days. It was last hit lately on 14th May 2016, awarding $251,545 at that time.

What is Major Millions Progressive Jackpot?

Major Millions is a progressive slot machine with a jackpot that is regularly over $400,000. The game is available in two versions -as a 5 reel video pokies and as a 3 reel traditional pokies machine. The video pokies version has 15 paylines and a fixed coin size of $0.20. You can play between 1 and 15 coins.

You will love the graphics on this pokies game as the winning paylines are lit up and wild and scatter symbols spin in place with bells and whistles to let you know you’ve significantly increased your winnings. Sounds effects include a military marching tune with the Major laughing, whilst the background sounds will bring back memories of time at the fairground. 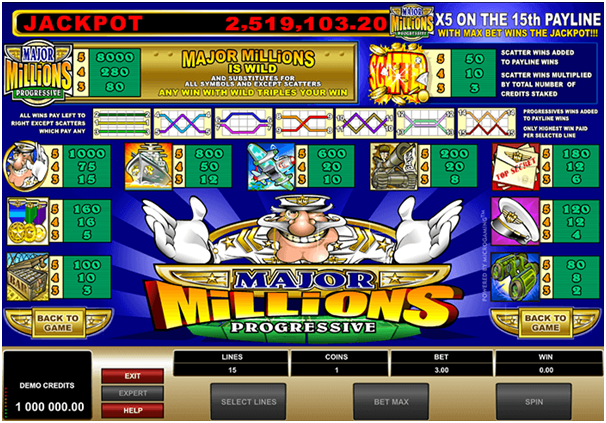 You can play Major Millions Progressive Jackpot at online casinos of repute. This pokies as said above is the military theme themed so once you start playing the game you will come across the reels as an assortment of military-based symbols including medals, the Major’s Cap, a rather friendly looking bomber, aeroplane, a tank, a top secret envelope, binoculars, a large warship and a supply crate loaded with what appears to be bars, possibly of chocolate.

Major Millions offers quick spin and regular and expert mode feature to play. The Expert Mode features AutoPlay, which allows you to play the game without having to actually interact with the casino software. Sounds in game, background and win are completely customizable, so you can turn them all off if you really want to.
What are the features in Major Millions Progressive Jackpot? 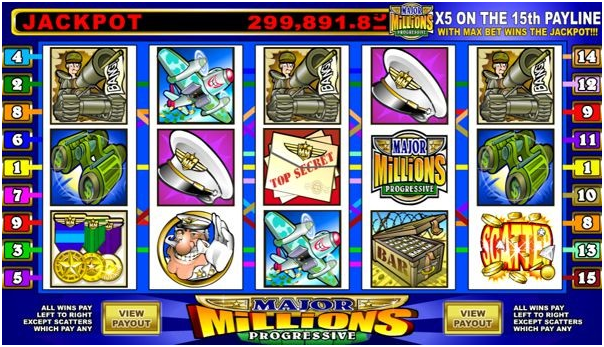 This is a five-reel game, and it is linked up with the three-reel version of Major Millions to produce a combined jackpot.
The Major Millions progressive game has a scatter, the Scatter Explosion symbol, which can show up anywhere on the five reels to complete winning scatter combinations as long as three or more of them show up on the five reels.

Major Millions, as mentioned, has 15 paylines. When five Major Millions wild symbols appear an any enabled payline from Payline 1 to Payline 14, the payout is 8000 coins. When five Major Millions symbols appear on the 15th payline, it instantly wins the progressive jackpot, which starts at $250,000.
In Major Millions, there is one coin size and one size only – 0.20. With 15 paylines, the maximum bet is 300 coins. That can be accomplished with one click of the “Bet Max” button. Remember that you have to have a bet of fifteen coins per spin to be eligible for the progressive jackpot.

How to win the Major Millions Progressive Jackpot? 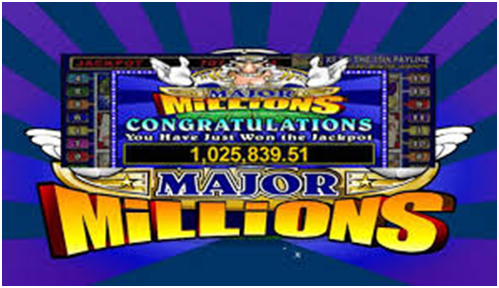 Major Millions offers a progressive jackpot that is valued from $250,000 – $1,000,000. The actual value at the time that you play will depend upon on the last time it was hit. Winning the top jackpot on Major Millions doesn’t require a special strategy or gaining access to a side game or bonus round, simply land 5 major millions symbols on the 15th payline and you win the progressive jackpot.

Land the Major Millions Wild in all these positions and you trigger the massive Progressive Jackpot prize, which could see you take home at least hundreds of thousands, if not more.

The key requirement is to play the max number of paylines, if you’re not playing the last payline you’ll never have the chance to win the progressive jackpot. 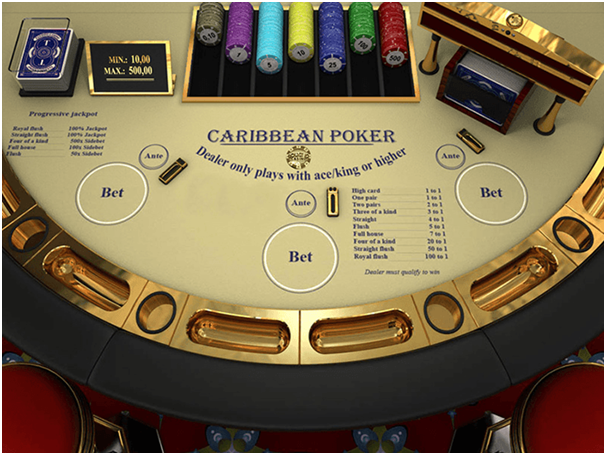