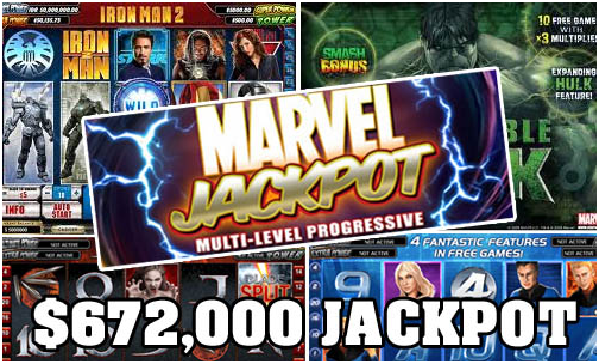 You must have seen Marvel Jackpot machines at the casino. Most of the Marvel Jackpot pokies are themed on movies or comics and therefore are popular among casino players. Launched in 1939, Marvel comics have entertained several generations of kids. It makes you feel and indulge in the movie as if in real world. Such Marvel pokies are developed by Playtech the brand gaming developer and can be found at many reputed online casinos to play.

One thing that pulls towards Marvel pokies is their Jackpot and its prize worth $1,000,000. Like in the Marvel Superheroes pokies which shares a four level progressive jackpot, with the smallest one being claimed every few days on average and the largest, being $1 million or more being struck every few weeks or months.

The other thing that you will like in the Marvel pokies is their outstanding graphics, gameplay and bonus features, with each one having its own combination of free spins, side games, multiplier wins and rewarding symbols.

Whenever there is a new film released from the  Marvel Studios Playtech company develops a pokie game on its theme. You will love to play pokies like Daredevil, Elektra, Blade, Iron Man (in three versions), Thor, Captain America and The Avengers.

Also many other marvel popular pokies are the X-Men, Incredible Hulk and Fantastic Four with new ones like Ant Man or even Deadpool which you will really admire.

If you look at the Marvel Superheroes progressive jackpot games you will see that it has real images from the movies and even the symbols are based on the main characters and objects featured in them. Iron Man 2 for example has symbols of Robert Downey Jr as Tony Stark, Mickey Rourke as Whiplash and Scarlett Johansson as Black Widow, plus the Iron Man suit, the Mark II suit and War Machine on the reels.

Other features of this pokies include stacked symbols, and a free spins round where an increasing multiplier comes into effect as they progress, plus a locked Wild symbol to bring you extra winning spins.

Like the movie, the Avengers pokies teams up Iron Man with Hawkeye, Captain America, Thor, Nick Fury and The Hulk in a thrilling battle against Loki. Played out over five reels, with 25 paylines, there are several free spins rounds to enjoy, with each character having their own game and different features in force throughout. The Captain America round has random multiplier wins, while Thor brings you extra Wilds and The Hulk appears as a stacked Wild during his round.

So how you need to win a Marvel Jackpot? 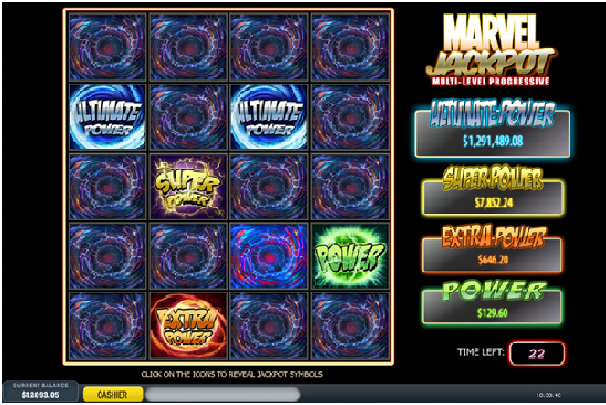 The Marvel progressive jackpot gets activated at random irrespective of the size of the bet you placed on the game. When this happens, you will be encouraged to play a pick-and-choose type of game. You will find that there is a grid of 20 Jackpot symbols, and all you have to do is start clicking on them, revealing either the Power, Extra Power, Super Power or the Marvel Ultimate Power jackpot symbols. Keep clicking until three identical symbols have been uncovered, after which you will be awarded the jackpot associated with it.

Though it seems simple to win but you need to unlock this round to play the Jackpot. Even if you do not unlock this round you will still love to play Marvel pokies because of their outstanding quality and game play.

You can play Marvel progressive jackpot at any online casino like casino.com or Spin Palace. Most of the online casinos offer great bonus offers and even free spins on such pokies games which will make your game play more interesting and even may land you to unlock the Jackpot round for great wins. It is not necessary that you need to play maximum bets to win but you can simply play with any random bet and wager the amount you like and hit the jackpot. 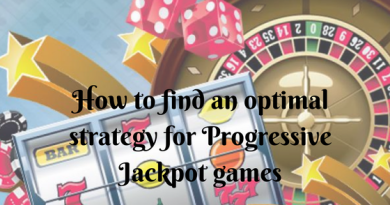 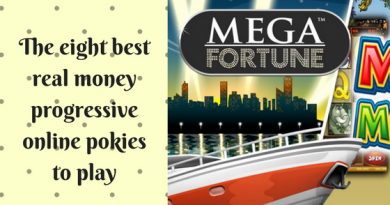 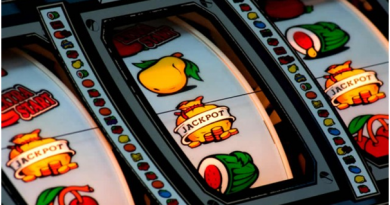 What Are The Fruit Machines That Offer Jackpots To Play And Win?